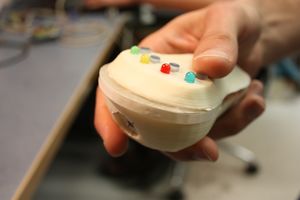 The EduBuzzer is a device designed to provide an additional channel of communication between students and teachers. It is a handheld box with four buttons that is in contact with the teacher's laptop or presentation station, from where he can initiate different modes (called "games") like voting, electronic raising of hands or team assignments. The devices themselves are generic enough that additional games can be implemented easily in JavaScript.

(In this class, the students use their EduBuzzers regularly, so they are not surprised as their teacher brings the box with the buzzers at the beginning of the lesson, and each grabs one. They flip them on as they grab them, and briefly insert the iButtons at their keyrings to authenticate to them.)
As an introduction to differentiation, the students were given homework exceeding the previously covered matter for own exploration. Of course, the students can't be expected to solve all of the problems, so the teacher starts the application "Homework success" on his laptop, which shows the EduBuzzer application selection since he plugged in the base station. Knowing that there are some students that get mocked for being know-it-alls, he chooses private mode, where only the teacher sees who pressed which button. As the students are already familiar with the game, there is no need for further explanations.
He starts a round for the first exercise, and the EduBuzzers' red and green buttons light up. As the exercise was rather easy, all students press green, meaning "I think I solved it correctly". The teacher decides not to waste too much time with the exercise, writes down the correct solution to the blackboard and proceeds to the second exercise.
This one was tougher, half the class pressed red for "I couldn't solve this", half the class green. The teacher lets the computer choose a random "green" student, who gets called out by his buzzer beeping and flashing green. The student presents his solution on the blackboard, and the teacher ticks it off as correct on his laptop.
After class, he has his student records fetch today's results (who buzzed in for what, who presented something) from the EduBuzzer database.

Due to a flu outbreak, a teacher has to hold a replacement lesson in a lower grade class he neither knows nor can reasonably teach. While some of the students can occupy themselves silently with homework (at least, so they say), others get chatty and loud. The teacher has a bag of buzzers with her, and decides to have the students play a game of Frets On Fire (or the four-key version of it).
While the students hand out the buzzers, she hooks his laptop up to the beamer, connects the EduBuzzer base station and explains the basics of the game. She starts the appropriate application, selects a well-known song and starts it. While the students carefully listen not to miss a beat and watch the scrolling tones, she can correct the last lesson's tests.

The EduBuzzer project includes everything from the application framework running on the teacher's workstation to the hardware of the EduBuzzer. All of it can be downloaded from our download area.

Convinced? The build your own EduBuzzers