In order to build an EduBuzzer, you'll need

If your hardware-fu is stong, the board will assemble iself

For etching the main board, you'll find all required files in the hardware/gerber subdirectory of the repository, or you can directly use the Eagle files in hardware. For building an ergonomic buzzer, use the buzzer files. 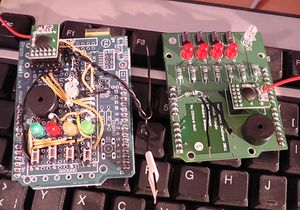 The arduino shield -- comparison between the prototyping and our custom shield

As an alternative (to try it out with less effort), use the arduino_schield files -- with them, you need fewer components, and get an arduino shield you can plug onto an Arduino compatible device. If you are good at soldering and want to get going with what is present in a typical hackerspace (at least, in the metalab), you can produce the same circuit even on a prototyping shield.

Solder in all the components as described in the part list, starting with the big parts. We recommend to use sockets for both the ATMega328 and the RFM12B module, as they are prone to overheating from inexperienced soldering, and as there is no programming header exposed for the ATMega. (Updates can be flashed using a serial bootloader, but if you break something, things get tricky.) Other parts to take care of:

Checkpoint: You can try out the hardware immediately by flashing firmware/ioexample.hex onto an ATMega328 (works even with the ATMega328 built in in an Arduino -- just flash it as normal, take out the chip put it into the buzzer's socket). The device will:

When the IO-example is flashed on two devices, the second should respond to the radio commands and cycle through its own LEDs.

If you checked the functionality of the example, you can flash firmware/firmware.hex onto it. While you are at it, you can write the MAC addresses of the device and its configured base station directly to EEPROM in this step as well.

Put the battery under the bridge in the lower part of the enclosure, the contacts go to the narrow side. You may need to remove artefacts from the production from rapid prototyping. The switch is put in the socket at the other side of the lower part and can be screwed tight. The toggling part of the switch will slightly protude from the surface.

Align the holes in the board with the matching parts of the lower part and just screw it in somehow.

You are now proud owner of a fully functional EduBuzzer. Hook it up with a computer using an FTDI cable, and start installing the software. Once this is done, you can build some more and start using your EduBuzzers or directly jump to building your own apps!