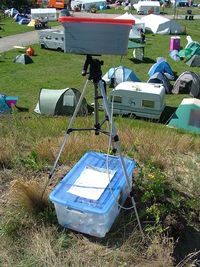 Recording raw material for a time lapse video of the Metalab Leiwandville at CCC camp 2011.

postproduction, adding a soundtrack, release in about 2 weeks :)

I’ll have OpenCV face detection run over the pictures and add a black bar over each recognized face before the time lapse video gets released. UPDATE: This was not necessary because the only people that are close enough to the camera to be recognized is me and some friends who helped me with the camera setup and I asked them personally.