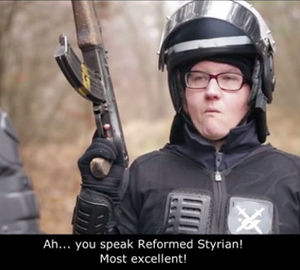 The new film by the Viennese postmodern Marxists "Monochrom" is a fractured didactic piece for the nerds and geeks of this world. In the grotesque catastrophe-western-fantasy-adventure film, Fratt Aigner and Alalia Grundschuber travel through the vast expanses of Niederpröll (Niederösterreich = the province of Lower Austria; Erwin Pröll = the province's eternal and omnipresent governor), where they encounter natives quite familiar to us here in Austria. Their adventure through the land of postal partners, small-time agrarian politicians and Raiffeisen Bank branch employees is first and foremost a tragic warning to the residents of alternative culture.

The old world has been reduced to ashes by the earlier beacons of hope (China stands for Maoism and Google for alternative culture). All that remains are stretches of land governed by idiocy and dialects. As Marxists, the people from Monochrom know that only the revolution can free us from capitalism. And yet the revolution is no more alive than unicorns are.

"Marxism gave a meaning to modernity. It said that, wittingly or not, the individual performs a role in a drama that has a shape and a goal, a trajectory, and that modernity will turn out to be just one act in that drama. Historical change is not arbitrary. It is generated by class conflict; it is faithful to an inner logic; it points toward an end, which is the establishment of the classless society." (Louis Menand)

It is not without reason that Menand begins in the past tense. Historical drama became tragedy, not only in the history of humanity, where universal emancipation has been postponed indefinitely, but also because it has given rise to a world in which one is more likely to imagine the end of the world than existence in another. Year for year, new catastrophe films continue to fill the movie theaters around the world. They tell of the downfall of the rule of law, which is replaced by the rule of brute force, the power of the strongest. In the Western, by contrast, the hero uses his strength to help law triumph in the figure of the sheriff – this is the history of bourgeois progress. "The Rise of Echsenfriedl" shows that today the Western can only be imagined in a post-catastrophe world. Progress becomes the mere reestablishment of the "good old days". The film confronts all catastrophe-addicted zombie fans with the reproach that if they keep on this way, they really will have to live in Niederpröll.