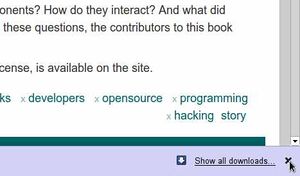 ‎'the structure of IT and computer engineering is almost totally a socioeconomic phenomenon and not a technical one...'

Having recently moved away from the bloated Chromium browser and happily using luakit since then, never looking back, I advise you to give it a try!

This bug/misfeature has been reported for ages. After saving some media locally, Chromium/Google Chrome webbrowsers display a download bar at the bottom of the screen, which persists until clicked away manually by the user. One official way to get rid of it by keyboard shortcuts is to open a download history window [Ctrl-J], tabbing to 'Clear all' [Tab][Tab][Enter], and closing the 'Downloads' tab [Ctrl-W]; this has the nasty side effect of purging the download history.
How would you like some easier way of doing this?

This tool (hopefully) warpes the pointer to the 'X', clicks button one and restores the pointer's original position, reclaiming precious screen surface by hiding the download bar.

TL;DR: close the download bar with a keyboard shortcut.