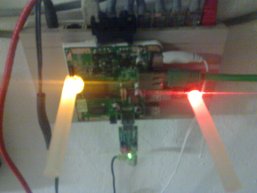 A hot glued space invader on a stripped dockstar attached to a router using hot glue and carrying a half glue stick glued over the orange and green led as well as a usb drive with the other half of the glue stick hot glued to the red led and a usb sound device with a green led.

The sound system in the whatever lab is controlled by a dockstar running music player daemon. You can connect to it with a mpd client to collaboratively create and share playlists. Streaming from your laptop is also possible by running a streaming server (e.g. shoutcast/icecast) and adding the stream to the playlist. Shared media is automatically indexed.

Install a client for you operating system and set the host in the connection settings to 10.20.30.40.