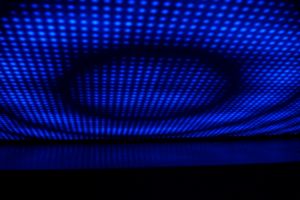 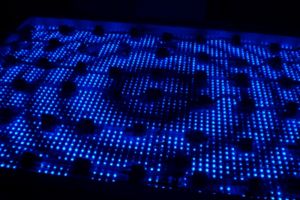 all hail to the hypnomatrix

For the LED Matrix we want to build on the CCCamp2007 we decided to design a GNU LEDMatrix Controller/Driver setup. It will consist of two parts the FPGA board and a several driver electronics boards. Now almost one year later we're still working on it :)

Everything is soldered and it works. We can stream videos via the parallel interface of the via board to the matrix with 72fps :)

The 8 rows are each connected to a powermosfet and are driven to ground one at a time (so the matrix is 8times multiplexed). For driving the mosfets we use two Quad-mosfetdriver which in turn are controlled by a 8bit shifting register.

For the columns we take almost the same components except that we have to source current. The mosfets can source up to 250mA but we limit it to about 20mA.

ok .. i2c will not work because via i2c is actually SMBus running at 16khz :( .. but hey what about the OBVIOUS? there is a parallelport which should give us 8-10 mbit :)

linux stuff in the works